This is a laboratory power supply with a stabilized output, continuously adjustable from 0 to 20VDC and from 2mA to 4A. The current limiter makes it useful in experimenting with electronics because you can limit the maximum current before applying the voltage. This power supply has also build-in protections from parts failure and output overload.

The power supply can function in two regimes: 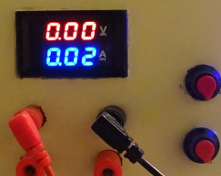 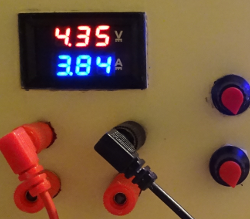 This is a modified circuit initially found at www.electronic-lab.com. This circuit can also be found as a commercial DIY kit, or module, and is very popular. Simulations in on this were performed in EveryCircuit and schematic drawings are exported from EasyEDA. Both of these programs are web based and free.

We split the above circuit to smaller sub-circuits and analyze the workings of each sub-circuit. The circuit can be split into four parts:

2.1. Rectifier with a negative rail

The power supply powers from step-down mains transformer with two secondaries rated at 18VAC and 2A. If you connect this in parallel you get 18VAC and 4A. This is the effective value, and the amplitude is a square-root-of-two times higher: 1.414 · 18V ≈ 25V. This means that we can charge the capacitors up to the amplitude voltage, but effectively we can get around 20V on the output.

Standard Graetz rectifier rated for at least 5A and capacitor C1 form a standard full-bridge rectifier for getting DC output. In our circuit we use op-amps 741 that output voltage levels from zero to some value. To get a zero level output from an op-amp like 741 its negative input must be bellow the zero level.

Working of the negative rail circuit in stable regime is as following: C1 is charged to 25V. In reference to the chosen ground voltage the secondary coil point T_2 oscillates with amplitude of 25V. When in positive half-period current flows from T_2 through C2 and D5. The resistance in this branch is small so C2 is charged during the positive half-period. During the negative half-period current flows from ground through D7 and C3 (charges it), then through D6 and discharges C2. Capacitor C3 is charged to about 9V which is defined by the current flowing through the Zener diode: 5.6V + 12.5mA · 270Ω = 9V. The C2 voltage oscillates around 16.5V as this capacitor charges and discharges. Visit this link to see simulation of the sub-circuit. 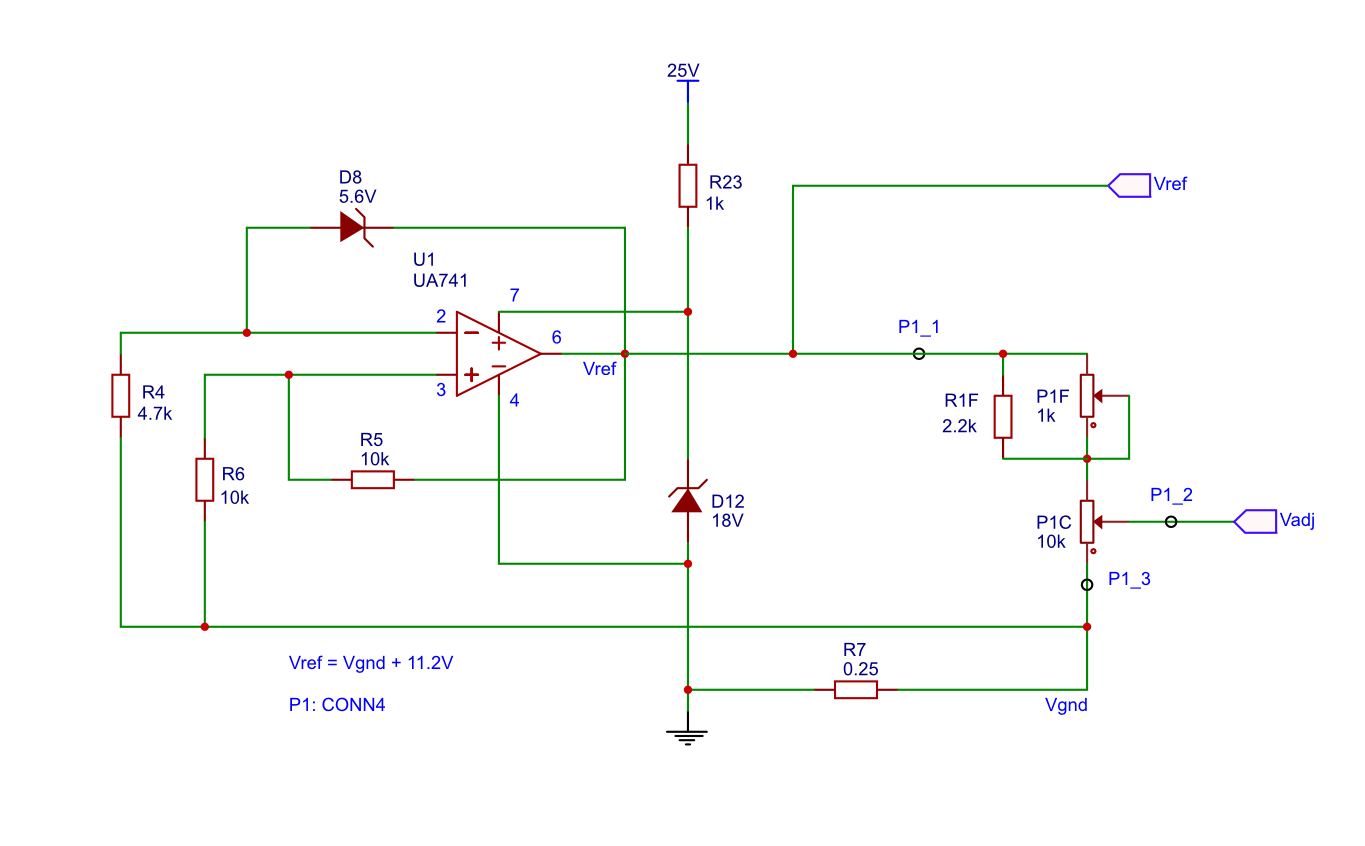 Referent voltage Vref from the U1 scales through two potentiometers. The first P1F is for fine and P1C for coarse adjustment of the voltage. Potentiometers P1F and P1C are mounted on the front of the casing. Fine adjustment is in the range from 0 to 687Ω of the voltage set by the coarse potentiometer. Because of the parallel connection with a fixed resistor the fine adjustment doesn't have a linear response, instead, it changes slower as the resultant resistance approaches the maximum value of 687Ω. The adjusted referent voltage (Vadj) is passed to the next op-amp which amplifies the voltage (adjustable - around 3 times) and powers the output transistors.

The output stage is constructed as voltage amplifier with U2 with adjustable amplification and an output buffer transistors for amplifying the current. Selected voltage (Vadj) is introduced to the positive input of U2 from the voltage adjustment circuit. In case the current limiter is on, Vadj is bypassed by the voltage set by U3 (Vo3). Bypassing is in a manner that Vo3 is low enough that D9 is forward biased. In both cases the voltage on the positive input is Vi2, being Vi2 = Vadj in the voltage source and Vi2 = Vo3 + 0.7V in the current source regime.

The op-amp tries to bring its negative input voltage level to Vi2. This is performed by forcing the voltage on its output (pin 6) to the point when it becomes equal to Vo2 = Vi2 · (TRIM1 + R11)/R11. Here a trimmer potentiometer is installed so we can set the amplification of the output amplifier in order to have P1 working in its full range. In this case the referent voltage goes from 0 - 11.2V, so the TRIM1 is around the same value as R11, which gives amplification of 2. Amplification is only for the DC component, any fast changes in the voltage Vo2 will pass through C6 and will be attenuated by the feedback loop build around U2. Also, possible noise coming from Vadj is grounded by C4, and some fast changes produced by U2 itself will be also passed by C9 and attenuated by the negative input of U2.

Circuit built around Q1 is used to protect the whole power supply from breakdown of the negative rail. In the case where something happens to the negative rail, the -5.6V disappears and BE junction of Q1 becomes forward biased. This brings Q1 in saturation and sinks all current from the base of Q2 shutting it off and successively shutting Q4 off.

Current amplification is performed by the Darlington pair Q2 and Q4, here we need Q2 because the op-amp cannot output the current needed to power a 2N3055 transistor in active regime. The capacitor C7 flattens high frequency noise and D11 is fly-back diode (in case some inductive load connected to the output gives negative spikes). 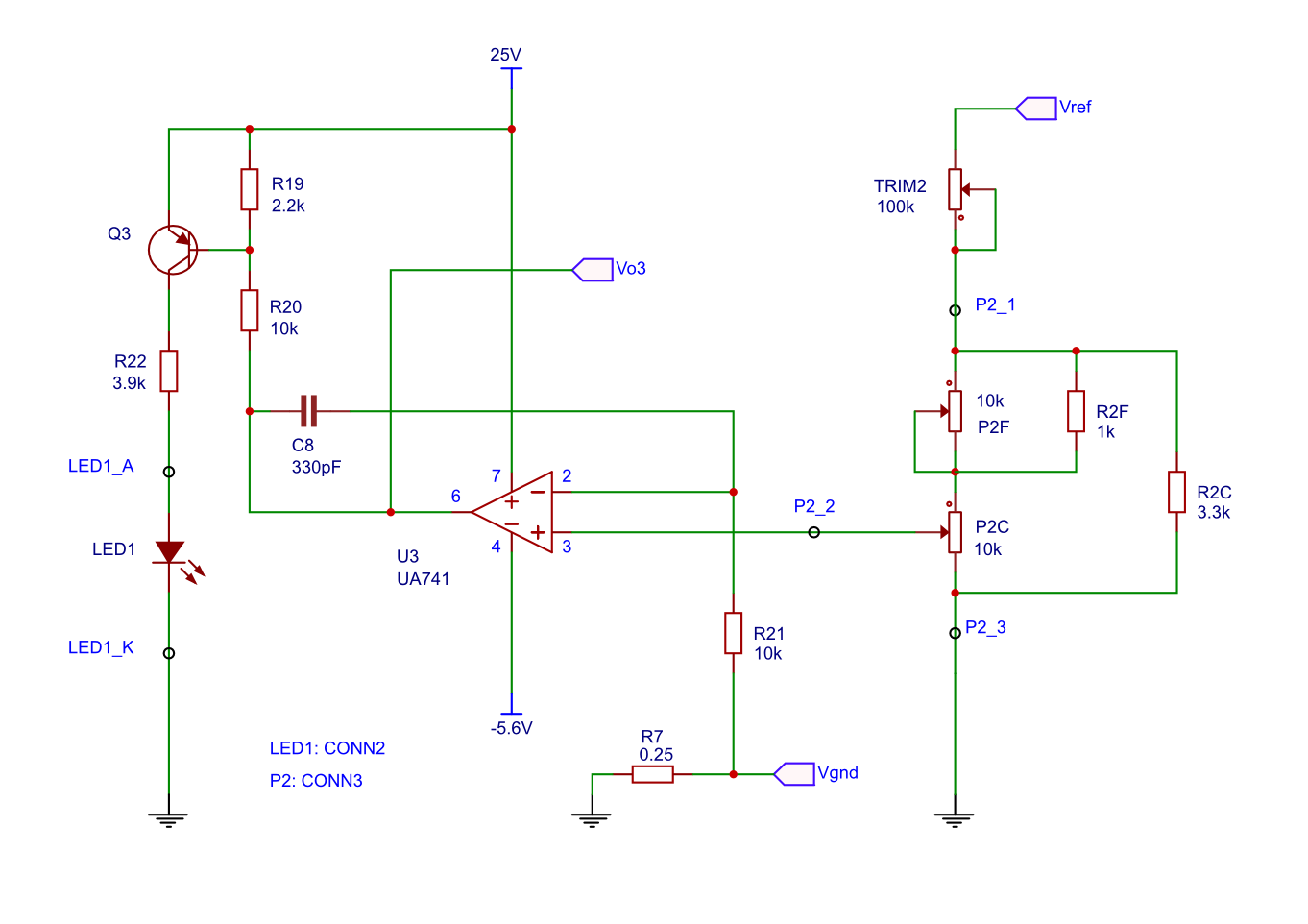 The current limiter is build around U3 which is used as a voltage comparator. When no load is applied, and the output current is zero, U3 gives 25V on its output (Vo3). This voltage level doesn't affect the output amplifier U2 because the diode D9 is reverse biased (see section 2.3). The output voltage Vo3 changes when current through the ballast resistor R7 is sufficient and Vgnd is slightly higher than the voltage on the positive input. When this happens the input of U3 is in inverse polarization, and the output swings from 25V to a negative value. The negative value of Vo3 makes the diode D9 forward biased and U2's positive input becomes same as Vo3 plus 0.7V.

For display we use cheap voltage and current meter. The meter used here has two lines for powering the meter (red and black) and three lines used for measuring in a common cathode connection (red, blue and black). We can connect the measuring lines as shown in the above image. The meter needs a power supply (from 4.5V to 30V DC), we can use a 15V from a standard regulator 7815. 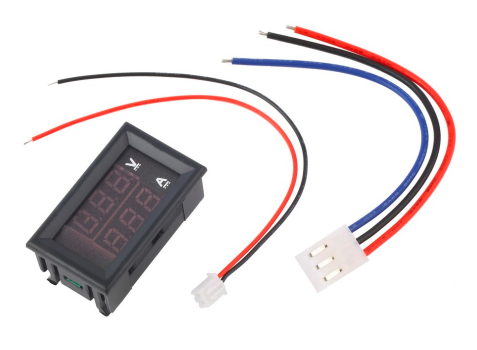 This is the assembly of the external parts of the circuit to the PCB. I made the case from textolite sheets that have beams on their sides through that connect with other sheets. Beams are drilled and glued with epoxy resin. This makes the bond strong enough to carry the construction. 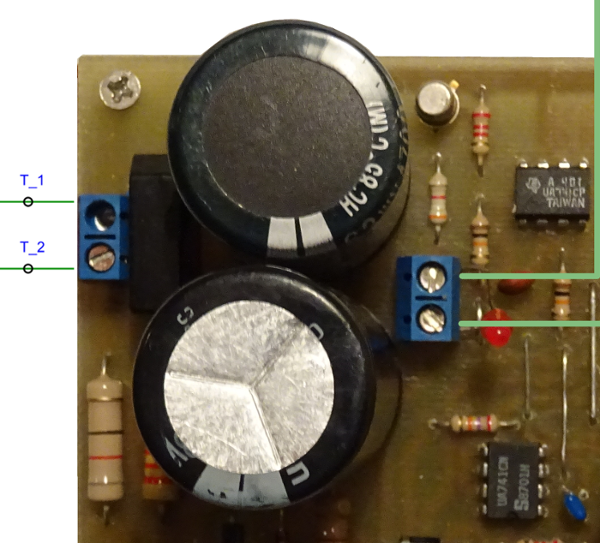 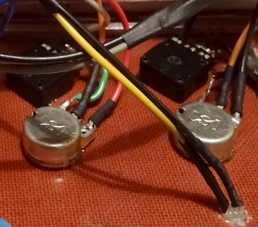 The enclosure is tightly packed but holes for air circulation around the transistors must exist. Finally I painted the case white with a spray color. 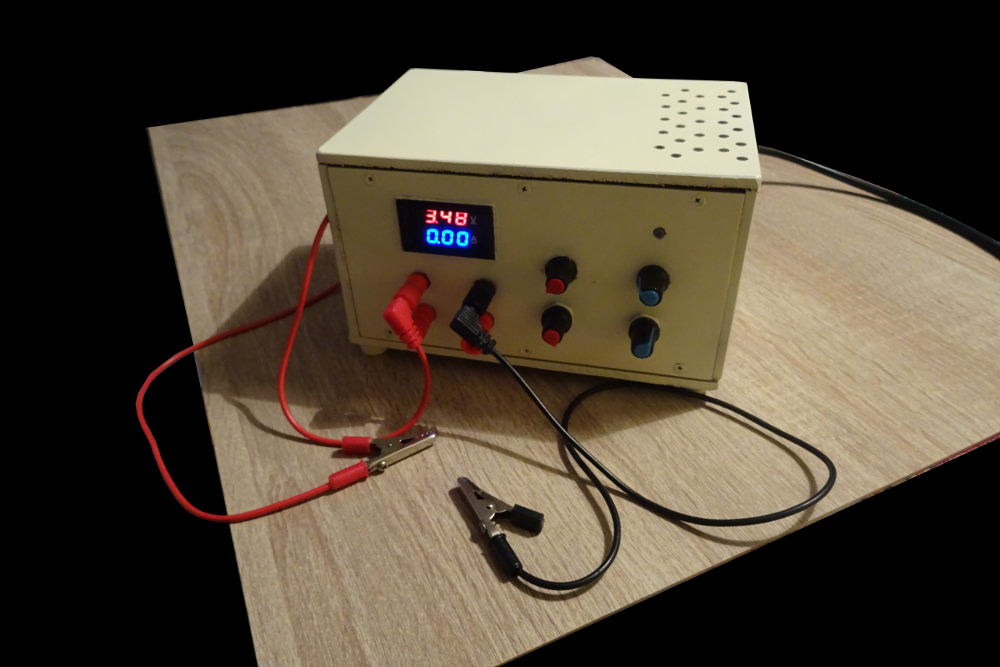 OpAmp negative rail can be powered by voltage pump.